A small and select group...


If you had, for example, a really pressing health problem, say, that a particular group of people had much worse health outcomes than the rest of the population, and then you decided to take steps to solve this problem, what would you do?
One of the obvious answers might be to provide a health workforce to help solve the problem. And one of the most obvious (and therefore most studied) components of a health workforce is doctors.
We know that Aboriginal and Torres Strait Islander people have much worse outcomes in health than other Australians. If I told you that there were about 22,000 GPs across the country, how many do you think would work primarily in Aboriginal Medical Services?
You might start by thinking that Aboriginal and Torres Strait Islander people make up 2.5% of the Australian population, so perhaps 2.5% of doctors, which would be 550 doctors. You might then add a few, as you’d think that increased numbers of people with diseases like diabetes, renal disease, mental health problems and the like might need an increased number. We could pick a number at random and add, say, 100 GPs taking us up to 650. (To put this in context, there are 1000 training places for doctors to become GPs this year.)
So would you be surprised to hear that there are 333 GPs across the country who say their main place of work is in an Aboriginal Medical Service. That’s not a typo. That’s 333. 92 of these were doctors training to be GPs, who are often on 6 month placements.

At this point in a blog post which contains numbers, it’s customary to quibble about the statistics. I don’t wish to disappoint you, so here goes:
You: Where are these numbers from? Surely they’re just made up like most statistics?
Me: No, they’re from the 2009 medical workforce survey. Every doctor has to be registered with the Medical Board of Australia, and when they renew they get a survey about their work. These figures were tucked away in the latest release. So they’re a little behind the times, but they are the best figures we have.
You: But it’s not an accurate reflection of the actual number of doctors working in Aboriginal health is it? I mean most doctors see Aboriginal patients in their practice don’t they? They wouldn’t be counted in this.
Me: That’s true. This only counts those who say they primarily work in Aboriginal health. It probably doesn’t include private GPs seeing Aboriginal patients in their normal clinic, and it may not include GPs who work part time in an Aboriginal Medical service and part time in another clinic.
You: And this isn’t just about numbers. Don’t they need to be in the right place, too. It’s pretty hard to get doctors to go rural.
Me: You’re right again. The largest number of Aboriginal and Torres Strait Islander people live in New South Wales. There are 76 GPs in NSW and 77 in the NT. The largest population numerically is in West and South West Sydney. But, still, proportionately more Aboriginal people live in remote and rural parts of Australia.
You: And Doctors aren’t the be all and end all of a medical service. There is probably some compensation from the huge numbers of Aboriginal Health workers and nurses working in this area.
Me: You’re right, doctors aren’t the whole story. Though I doubt the numbers are made up for by other health professions – the other workers in AMSs are often doing non-doctor jobs. And I’m not aware of any figures for these other professions, though this may become clearer with national registration of Aboriginal Health Workers.
This really is the best information we have. (At least, the best information I know of – if you know of better stats on this, I’d love to hear from you.) And the bottom line is that for the size of the problem, even allowing for the caveats above, the medical workforce is pitifully small for the size of the problem. It leaves a tiny number of doctors with a large and complex workload. And, because Medicare revenue is generated by doctors, it leaves Aboriginal medical services disadvantaged when it comes to generating funding, too.
There are many reasons for this – those are for another post – but in the mean time, what can you do?
If you’re a GP, do take the opportunity to work in Aboriginal health if you get half a chance.
If you’re someone with policy responsibility, think about what needs to be done to close the gap, what workforce is required to do it, and where they need to be to do it.
If you’re neither of these, stay informed, ask questions and advocate. I’ll post more on this later.

Update
The AIHW released a little more information on this recently: The 2010 medical workforce survey. Not much is different, but there is a slight change in emphasis. Gone is the state by state breakdown , but instead there is a division into clinical and non-clinical (managerial, education, research and public health roles, I would imagine). So, here goes:

There are 310 doctors working clinically in Aboriginal Medical Services in clinical roles. Across the whole country. Another 35 work in non-clinical roles. They work on average just over 36 hours per week (compare over 23,770 in "private practice", over 17,000 of these GPs at an average of 41.23 hours per week). You'll notice that's fewer doctors working fewer hours. (Guilty m'lud).

Yes, let's quibble aboout the figures. But in the end, I suspect that all the quibbling in the world can't hide the fact that we are medically understaffing the services required to close the gap.

Don't go away too gloomy, though. Aboriginal Medical Service do need more doctors, especially in rural areas, but there is evidence that they do extraordinarily successful work without enough!

Update 2013
Well, look! The results of the 2011 Medical Workforce Survey have just been released  and there are now 532 doctors practicing in an Aboriginal Medical Service setting, 483 of these clinically. Compare this to over 33,000 GPs, over 33,000 in hospital medicine and over 1500 in "Community Health Care service" setting. The figures for doctors in an Aboriginal Medical Service aren't broken down by hours worked or by state this time (yet?) so this is all we have. Slightly more than previous years, but still a small and select group!

Update 2014
The 2012 Medical Workforce Survey results are now out. The picture is much the same.

It's also interesting to note that the number of hours worked on average is less than other GPs (hello, recruitment strategy!) but also that the AMS medical workforce is 50/50 male female and is younger than the mainstream GP workforce. I see signs of sustainability into the future here.

Finally, a comment from the press release - 35% of the whole medical workforce are GPs and 35% are Specialists. I'd love to hear how that compares to other countries. Given that GPs see 85% of the population each year for 6% of the health budget, and we know that most care happens in the community, I'd be wondering if we need a higher proportion of GPs than that. I'd love to hear what you think.

Update 2015
I'm not sure when this happened, but the 2014 Medical Workforce Survey data are out. (Presumably, somewhere in the ether are the 2013 data!). 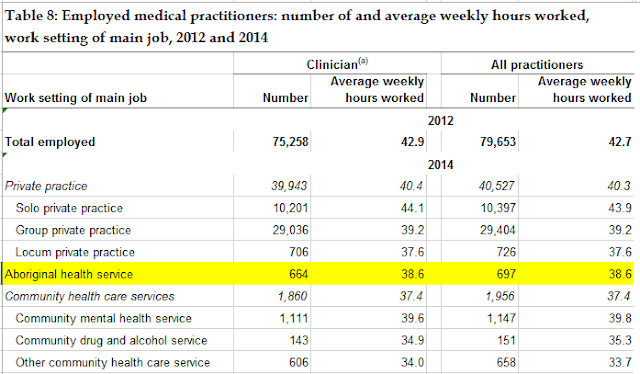 There are now 697 doctors who say their main work setting is in an Aboriginal Health Service, with 664 of these working clinically.

For context, in total there were 40,527 doctors working as GPs and 85,510 doctors in total. so there are 1.7% of GPs or 0.8% of total doctors working in an Aboriginal Health Service setting. That's an increase, though with the average number of hours per week being slightly less, there's slightly more of a workforce shortage than that headcount suggests. (We also know that consultations in an Aboriginal Health Service tend to be longer than in private practice - see here and here - so, again, a simple headcount underestimates the workforce shortage,)

Of course many private GPs and community health services will also see many Aboriginal and Torres Strait Islander patients.

This year's data has little further information about who these doctors are or where in Australia they work.

You can find the data yourself in this Excel spreadsheet and go to Table 8.

So - get recruiting now! We'll see the results come through in the data in a few years time!
Posted by Unknown at 9:32 PM

Email ThisBlogThis!Share to TwitterShare to FacebookShare to Pinterest
Labels: workforce